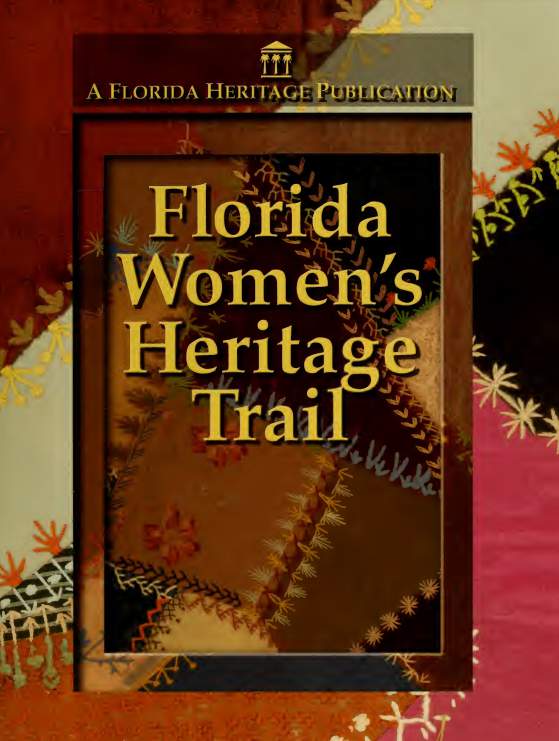 The Florida Women’s Heritage Trail has more than 30 pages of important places and “firsts” throughout women’s history.

You can find some of those great sites that are located in Central Florida by checking out this article here— but we wanted to share some of our favorites from around the state as well. We narrowed it down to ten for this article, but you can check out the full trail here.

The cottage belonged to Julee Panton, a “free woman of color” who worked to purchase the freedom of her fellow blacks. The cottage was later owned by a succession of free black women. The simple wooden vernacular building, built between 1804 and 1808 during the Second Spanish Period, is Pensacola’s only surviving example of “to the sidewalk” construction. Its pegged framing and beaded ceilings were carefully preserved for its new role as a black history museum.

This park was once part of a 3,760- acre hunting estate owned by Alfred B. Maclay, a New York financier. He and his wife designed ornamental gardens for the property, including a Camellia Walk, Walled Garden and Secret Garden. After her husband’s death in 1944, Louise Maclay (1885- 1973) opened her 28-acre ornamental garden to the public and in 1953 donated 307 acres to the state. Today, close to 100 varieties of camellias and 50 varieties of azaleas bloom from December through April.

Cross Creek, the home of Marjorie Kinnan Rawlings (1896-1953), is where the world-famous author wrote her most popular books, The Yearling and Cross Creek. Rawlings came to Cross Creek when she was 32 and drew inspiration for her books from the land and the Florida Cracker community. In 1939, she was awarded the Pulitzer Prize for fiction for The Yearling, the story of a 12-year-old boy and his pet deer who lived in the Florida scrub. With its raised floor and pitched roof, the Rawlings house is a fine example of “Cracker architecture” and is well- suited for the hot Florida climate. The Rawlings home is open to the public and guided tours are provided. Many of Marjorie Kinnan Rawlings’ books, drafts, letters, and photographs are included in a collection not far from Cross Creek, at the Smathers Library East on the University of Florida campus in Gainesville.

The Eartha M. M. White Mission Museum is a memorial to the humanitarian activities of Clara English White (1845-1920), a former slave, and her adopted daughter, Eartha Mary Magdalene White (1876-1974). Clara White was a pioneer member of the Bethel Baptist Church. Her influence was continually felt throughout the community as she devoted her life to helping those less fortunate. The masonry vernacular building was designed by noted architect Henry John Klutho to serve as a symbol of hope for the needy. Her daughter, Eartha Mary Magdalene White, was also a humanitarian, educator and publisher. Through her efforts, a prison mission was formed. She founded the Eartha M. M. White Nursing Home, which specialized in caring for the needy, and created a senior citizens’ home for African-Americans. White donated land for the city’s first park for African-American children and was twice honored at White House receptions. White served as a lobbyist for African-Americans with the Jacksonville City Commission and the Florida Legislature.

A stained glass window in this spectacular Gothic Revival church commemorates Mary Martha Reid (1812-1894), often called the “Florence Nightingale of the Confederacy.” She was married to Robert Raymond Reid, a federal judge who was appointed Territorial Governor of Florida. After his death in 1841, Reid came to Fernandina Beach and taught school. During the early days of the Civil War, one of her sons enlisted in the Confederate Army. As a result, she soon realized that there was a great need for medical care for Florida Confederate soldiers near the battle sites. Reid was instrumental in establishing a 150-bed hospital on the outskirts of Richmond, Virginia in 1862, where more than 1,000 soldiers were treated. She fled Richmond when it fell to federal troops on April 2, 1865. Reid then returned to Fernandina Beach, opened a school. and resumed her teaching. She is buried in the church’s cemetery.

In 1860, upon the death of her husband, Maria de Los Dolores Mestre Andreu (1801-1871) became one of the nation’s first female lighthouse keepers. The St. Augustine Lighthouse is one of Florida’s first official lighthouses authorized by Congress, and was built in 1824 on Anastasia Island. The present 165- foot tower dates from 1874 and is the state’s only spiral-banded lighthouse. It also contains s its original first-order Fresnel lens.

The history of Ybor City’s Cuban community is told at the Ybor City State Museum. The museum complex covers approximately one-half of a city block. It includes an ornamental garden, three restored cigar workers’ houses and a bakery building. The Ferlita Bakery building, with ovens, colorful sign dis- plays and exhibits, forms the core of the museum complex. One cigar worker’s house. La Casita, is a museum. Luisa Capetillo (1879-1922) was an advocate of workers’ and women’s rights. She was also an experienced labor organizer. Local cigar workers elected Luisa to the important position of lector. Selected and paid by the workers, she would read to them as cigars were being hand-rolled.

Dr. Mary Jane Safford (1832-1891) was a Civil War nurse who later became the first practicing woman physician in Florida. Constructed in 1881, the Safford House is the oldest known residence in Tarpon Springs. It is a fine example of Florida vernacular architecture, and was built by her brother, Anson P. K. Safford, a founder of Tarpon Springs

The Ziff Museum explores the ways in which Florida Jews have influenced the state’s history. Its collections and exhibits include information about many important Jewish women, including Annie Ackerman and Rose Jeremiah Weiss. Annie Ackerman (1914-1989) was an advocate for the elderly. Ackerman was known as the “Condo Queen,” traveling from condominium to condominium working with older residents to develop voting blocks. Through her efforts, Dade County leaders heard the needs of the elderly. Between 1969 and her death in 1989, Ackerman worked unceasingly for elder rights. When Rose Jeremiah Weiss (1886-1974) arrived in 1919, Miami Beach was a sparsely populated sandbar, accessible only by boat. The area became her home and its residents her family. Weiss earned her nickname “Mother of Miami Beach” due to her persistent efforts to organize welfare services for the needy. Following the devastating hurricane of 1926, she became an official representative of the Red Cross and raised money for relief funds. During World War 11, she sold $1 million in war bonds, more than any other woman in Florida. Active in local politics, she attended every city council meeting between 1921 and 1959.

Formerly known as The Historical Museum of Southern Florida, HistoryMiami Museum collects and exhibits materials about the history of South Florida. On permanent exhibit is a photograph of Julia DeForest Sturtevant Tuttle (1848-1898), the “Mother of Miami.” The museum’s archives contain information about the founding of Miami and Tuttle’s role in it. The book Julia’s Daughters: Women In Dade’s History tells of Julia Tuttle and other women who helped develop Miami and Dade County.