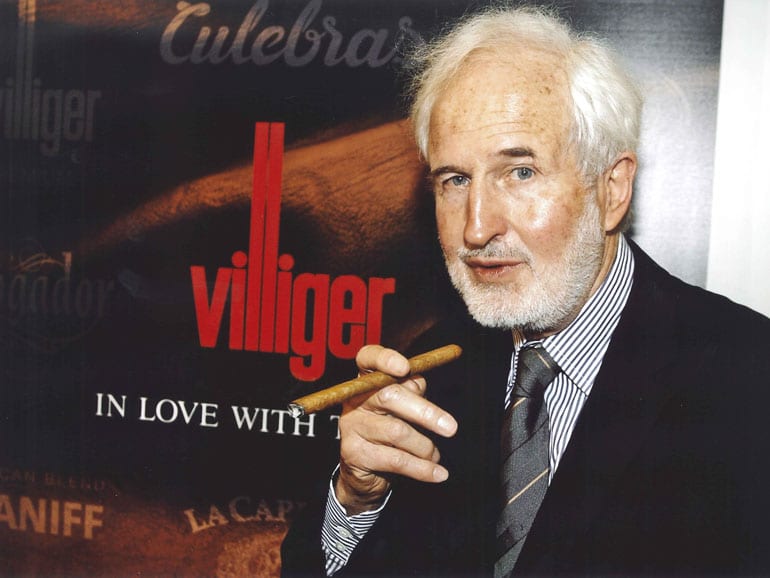 Certainly a reason to celebrate if it weren’t for the pandemic right now. Therefore, this anniversary, like last year’s 90th birthday of the chairman of the board of directors and sole owner Heinrich Villiger, will be celebrated relatively quietly and without which, otherwise on occasions of this kind.

The history of the Villiger company begins as early as 1888 when Jean Villiger built a small cigar factory in his home in Pfeffikon, Switzerland – the cornerstone for today’s global company with factories in Switzerland, Germany and Indonesia, as well as a factory for premium cigars in Brazil . A total of around 1,500 employees work for the company worldwide.

After the end of the First World War, the sons Hans and Max Villiger took over the company, hence the name Villiger Söhne. Between 1918 and 1938 there was a rapid development to the largest pillar factory in Germany. This process was accompanied by the establishment of branch plants in Munich and the takeover of Geska, Bad Cannstadt, with its production facility in Schönaich. Further Villiger branches were established in Griessen, Blumberg, Bonndorf, Weil im Schönbuch and Lenggries.

Brands that are still known worldwide today, such as Villiger Export, but also the Rio6, were brought onto the markets.

The two plants in Munich were destroyed in bombing raids during World War II, and reconstruction cannot begin until 1950.

In 1950, today’s sole owner and Chairman of the Board of Directors, Heinrich Villiger, joined the company. In 1954, after Hans Villiger retired, his nephew Heinrich Villiger became his successor at the age of just 24 and took over the management of the German subsidiary in 1958. In 1961, the Villiger Kiel received a plastic mouthpiece instead of the goose quill previously used. In 1965 the Rillos brand is placed on the German market.

When Max Villiger died in 1966, Heinrich Villiger’s brother, Kaspar Villiger, joined the company and both brothers managed the company together until 1989. After Kaspar Villiger had decided on a political career, combined with the election to the Federal Council in Switzerland, Heinrich Villiger took on overall responsibility for the company. In the 1960 / 1970s, the company took over several German and Swiss cigar factories, Holzapfel in Bünde, the Schäfer brothers in Heidenheim and the Eichenberger-Baur company in Switzerland. In 1968 an additional production facility is created in Berlin. The successful brands Roll’s, Brio and Braniff are introduced in the mid-1970s.

In 1976, for advertising reasons, the company entered Formula 1 with the sponsorship of the Shadow team and a victory at the Austrian Grand Prix in 1977. The company was and is the only cigar manufacturer in the world ever to be active in Formula 1 in the premier class of motorsport was represented.

1979 the company Deter with the brand Schwarze Weisheit is taken over, as well as various companies in Switzerland in the following period.

In 1983, production began in the new plant in Bünde Dünne, followed by the gradual closure of the production facilities in Berlin, Munich and Heidenheim.

In 1989 the previous division 5th Avenue Tobacco Gallery is liquidated and incorporated into the new 5th Avenue Products Trading GmbH, the first joint venture worldwide for the exclusive distribution of Cuban cigars in Germany.

Monika Villiger, the sister of today’s sole owner Heinrich Villiger, ran the export business very successfully from 1968 until you retired. Building on this, the comapny founded Villiger North America Inc. in 2002 and in 2006 the Villiger France Sàrl. In 1999 Pt Villiger Tobacco Indonesia was founded for the bobbin winding of cover sheet blanks and at the end of the 1990s El Mundo del Tabaco Import GmbH was founded.

All companies that already existed but were also newly founded in the following years were then combined as a group under the Villiger Söhne Holding AG in Pfeffikon, Switzerland, which was founded in 1996.

In 2008, on the occasion of the 120th anniversary of the Swiss company, the first hand-rolled Villiger longfiller brand was launched on the market under its own name, Villiger 1888.

In 2013, the now very successful business with premium long filler cigars from three countries so far was expanded to include a fourth country of manufacture. At that time under the name Charutos Tobajara Ltda. Founded in Cruz das Almas Bahia, Brazil, the meanwhile renamed Villiger Do Brasil  produces hand-rolled Puros for Europe, Asia and North America.

But what does the future look like? Predictions are difficult. The tobacco industry is increasingly regulated and put under pressure worldwide by state authorities and the “health industry”.

The patronizing of the consumer is constantly expanding. The scope of the industry is increasingly restricted. But in the end one thing remains that tobacco is a luxury product that has been consumed by people for centuries. That is why Villiger believes in the future of the cigars, in further positive sales development for cigars and cigarillos, and will remain loyal to these brands.