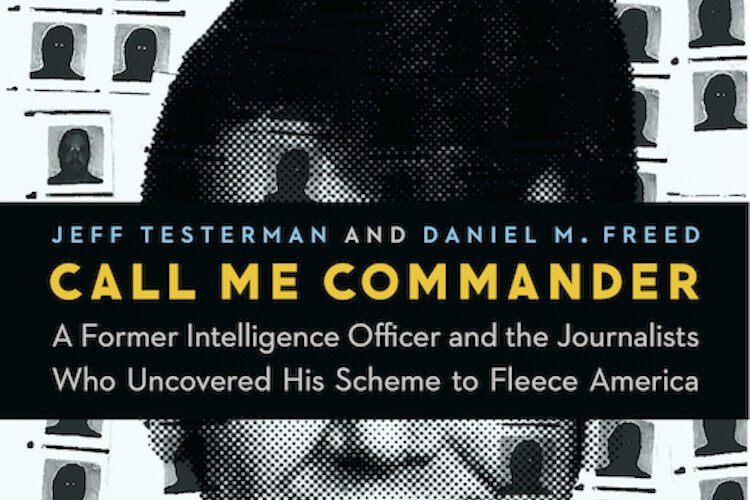 Intro from author Jeff Testerman, a former investigative reporter for the Tampa Bay Times: “This story began in August 2009 when I was on a routine errand to get a quote for another story and encountered the Commander. Something did not seem authentic about this odd character out in front of a dilapidated duplex in Ybor City, a man who was supposed to be a director of a 66,000-member veterans charity.

“My research partner, John Martin, and I began to check. Within a week we had determined that the board of the charity consisted of fictional names. It seemed we had stumbled onto a phantom charity, an elaborate charade right in our back yard. Six months later, we published ‘Under the Radar,’ which drew back the veil on the Commander and his grand illusion, and which won the national prize for public service from IRE (Investigative Reporters and Editors).

“A few years later, Freed and I had lunch in Ohio and chewed over a project idea, to tell the story of the Commander whole, including his disappearance, his pursuit, his capture, his unmasking, his trial and, most importantly, the secret behind who and what the Commander really was. Freed brought much original and amazingly creative reporting to solve this last question.’’

Here is the excerpt:

When Commander Bobby Thompson surfaced in Tampa in 1998, it was as if he had fallen from the sky, providing not a hint of who he really was or where he had been for so long. The Commander’s friends and family had not laid eyes on him for years. The last sign of him had been back in 1984, when his dark-blue Corvette was found in a parking lot at the Phoenix airport, unlocked, the keys still in the ignition. Then he was gone. Thompson had been underground and so deeply immersed in secret missions for such a lengthy period, in fact, that his mother — who lived just forty-five minutes away in Clearwater — had gone to court in 1996 to successfully petition to have her son declared dead.

As Thompson began a new mission in Tampa, he kept to himself. He registered to vote as a Republican, using an address at an apartment near a high-prostitution area on Nebraska Avenue and signing the application, “Bobby Charles Thompson.” He blended in. Often dressed in ragged clothes, with a scruffy beard, a ponytail, and a flop of hair over his forehead that some would call a pompadour, the sixtyish Thompson looked like a derelict wandering the streets of some of Tampa’s poorer neighborhoods. He was on foot so often because he did not own a car or even possess a driver’s license. His breath frequently hinted of alcohol. No one could possibly have guessed that he was better educated and more highly trained than anyone he might pass on his walks to the bank or corner grocer.

Thompson quietly nestled into a dilapidated duplex in a rough section of Ybor City, a section of Tampa built by Cuban, Spanish, and Italian immigrants in the nineteenth century. The shabby structure had peeling paint and cracked roof tiles. It was situated across the street from a fence topped with barbed wire around the parking lot of the aging Cuesta Rey cigar factory. Beyond the red-brick factory, traffic noise from the elevated interstate highway running through Ybor echoed across the Commander’s neighborhood day and night.

Ybor had once been a vibrant center of culture and commerce in the emerging port town of Tampa, and tobacco-processing centers like the Cuesta Rey helped christen Tampa the “Cigar City.” But now, in its old age, Ybor’s historical residential neighborhood looked neglected and drab. Streets were lined with fading clapboard homes and boarded-up properties. Wrought-iron burglar bars protected the windows of the few Latin eateries and markets that remained. In this low-rent district on Tampa’s eastern edge, the run-down duplex was the last place you’d expect to find someone with the Commander’s pedigree. But it was ideal for someone hoping to stay under the radar.

What was he before moving to his Ybor City hideaway? No one knew. Investigators who burrowed backward could find no dependable record anywhere to suggest who or what or where Thompson had been before he landed in Tampa. Anyone who tried to track the Commander’s footsteps tumbled down a rabbit hole of dead ends and false leads. Thompson might have been an official at a Mississippi Indian casino; he could have been a business owner in Louisiana or a former mental patient in a backwater Florida town. Or he might have been someone else, something entirely different. He was a cipher — his origins, a question mark.

Years after he moved into the Ybor City duplex, the Commander’s place stood out for no reason at all, except for the strange, seemingly contradictory collection of decals plastered across his front windows: a Bush-Cheney campaign sticker, a trespass warning, others showing badges supporting the local sheriff, one with the iconic picture of Cuban revolutionary Che Guevara, another depicting a handgun and the warning “Security provided by Smith and Wesson,” and yet another with a logo of a blue eagle clutching in its talons a gold anchor.

The stickers were clues that told of the man behind the duplex door. Thompson, foremost, was a political animal. He was a law-and-order kind of guy who once advocated that drug dealers convicted of a second offense should go to prison for life. He guarded his privacy yet still loved being in the company of powerful people. He thought of himself as a revolutionary, a descendant of the colonial founders who overthrew a tyrannical king and redefined liberty. He worshipped the First Amendment, and the Second.

And the eagle-and-anchor decal? That was the emblem for the U.S. Navy Veterans Association, a political-and military-minded organization that Thompson guided with ingenuity and guile to breathtaking success. In deed if not by rank, he was the commander of the Navy Veterans group, and taking it to its zenith was the new mission that now defined his life. By the time he was done, he would hold the purse strings of one of the most remarkable fund-raising campaigns in U.S. history, stand with politicians at the highest levels of government, and cause officials across the country to wonder, how did he do it all?