Asked on Friday if there would be a festival of John Burns for his final week as part of the breakfast team at 3AW, the co-host of Melbourne’s long-time #1 radio show told Mediaweek: “I have no idea what they have got planned. I didn’t want it to be a festival of anything.” Burns added it was hard to do much anywhere to celebrate in Victoria at present and added it’s hardly a party atmosphere in its capital city again in lockdown.

Burns was speaking to Mediaweek after lunch with his wife Monique. “I am sitting in my back garden with the bleak winter sun trying to warm me up. I am having a Cuban cigar and a glass of cognac.”

After some speculation in 2019 that Burns would be replaced in breakfast, 3AW confirmed his departure late last year, subsequently naming Russel Howcroft as his replacement. A statement at the time indicated Burns would continue to contribute on other programs. He is not sure exactly what that means yet. “I have yet to speak to [3AW station manager] Stephen Beers about that, apart from him indicating some time ago a wish to keep me as part of 3AW.” 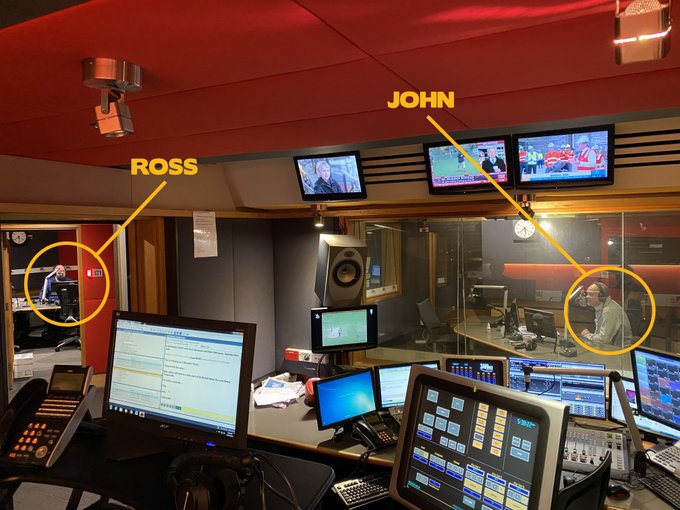 Social distancing at 3AW with Ross (left) and John (right)

Burns told Mediaweek he had never contemplated quitting 3AW before the station raised it. “When the time comes you have to get your mind around it. After having initially been told that nothing lasts forever, I have grown to accept the fact and you really can’t do the same thing forever. It has been a fabulous ride that has been so successful.

“I don’t want to go out on a downer. It’s good to be finishing on a high and sitting at #1 with perhaps 20 years that may never be repeated. Ross and I have been good mates for a long time and we still are. We don’t see each other much now because our lives have changed. He has a new family and mine have grown up and left home.”

When working as a barrister, Burns first started working with Stevenson on his Sir Lunchalot segment, every Friday for a decade. Burns leaves 3AW breakfast on July 31, 19 years and six months after joining Stevenson as a co-host in January 2001. It didn’t take the new duo long to build ratings consistency.

“In the first year I think we lost one survey, but every other survey we have won by a mile.” That ratings dominance has given the show an autonomy that not everyone earns in the media industry. “There has been absolutely no interference whatsoever over the years in the breakfast program. We have been fortunate to be virtually independent and been allowed to run our own race.” 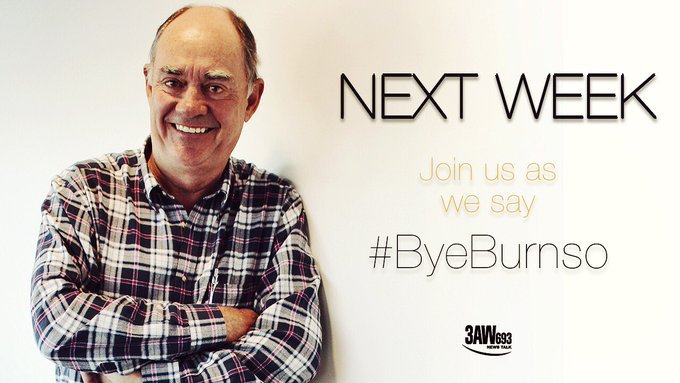 One of the smart decisions made by the hosts was the avoid politics, “Unless absolutely necessary,” explained Burns.

“We also avoided any news that was distasteful. We tried to have as much fun as we could and put a smile on people’s faces. There were certain periods where incidents that dominated the news we needed to follow. That included the Tasmanian mining disaster. Bigger than that of course was 9/11 which occurred during my first year. I had a call from station manager Graham Mott about 1am telling us about the disaster. We were on holidays. Ross was in Hong Kong and I was in Melbourne. I went into the studio immediately with then program director Steve Price and we had to cover 9/11.”

The politician rule has been broken, but only a few times. Only a few of the six prime ministers during the Burnso years got a guernsey. John Howard was prime minister during the first seven years of Ross and John, but he didn’t make it. “It might have been hard to make him funny,” laughed Burns.

“When I started Steve Price was program director and he said, ‘If you do well, you might last 10 years here.’ It turned out to be 20.”

Burns joined 3AW when it was in Bank Street, South Melbourne under the ownership of Southern Cross Broadcasting. Tony Bell was the chief executive and Graham Mott was the station manager.

Fairfax later acquired the business and the station moved to the top floor of the then new Fairfax House in Colling Street, Docklands. When the Melbourne station became part of Macquarie Radio Network, longstanding program director Clarke Forbes lost his job in 2015. Adam Lang (COO and then CEO) and Russell Tate (executive chairman) led Macquarie Radio, fiddling with 3AW in some timeslots, but largely leaving breakfast alone.

More recently Nine Radio took control after buying out the shareholding of Macquarie Media’s John Singleton and other minor shareholders.

Burns: “My alarm clock wakes me early enough to get to the studio about 4.45am. Ross gets in a little later after looking at the news at home. We don’t look at each other before we go on air. When we get on air we have no idea what we will talk about. We then have a conference at 6am [30 minutes after the show has started at 5.30am] for what we will then talk about.”

There is not much post-show analysis involving the hosts. “After the show we say goodbye,” said Burns.

“There is no preparation and no post-show debriefs. We need everything to be absolutely fresh.” Burns noted it’s a style that might not work for everybody. “Ross and I have an agreement that we don’t want to know what each of us is going to say. We want it to be a surprise to us and everybody else, and it tends to work.” 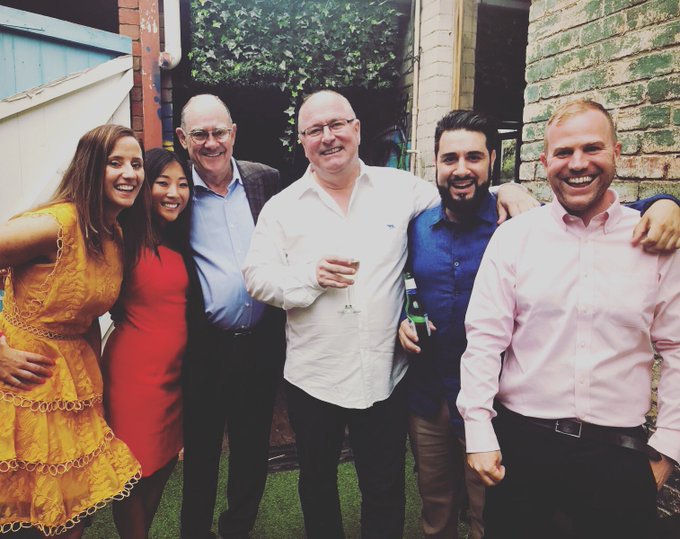 Burns: “We have a terrific dedicated team. Kate Stevenson is the senior producer. The assistant producer is Scorcher (Mark Davidson) and producer Mikkayla Mossop. The bloke who runs the panel –Damian Tardio – is just so good. He can pull audio clips to use seemingly sometimes before we have even thought about it. They are so dedicated and so loyal. A great team and we love them.”

Burns joined 3AW as a replacement for Dean Banks in 2001.

There had been all sort of speculation about who might replace John Burns before Howcroft emerged. The same sort of thing happened when Burns originally got the job 20 years ago. “The speculation about who was going to take over was enormous. There was a lot of high-profile people who applied for the job. It was Tony Bell who settled on me.”

Asked who had the final say this time, Burns said: “I really don’t have any idea.”

Burns: “I have a T-shirt that says ‘I’m not dead yet.’ I might wear that on my last day. I am still very active and healthy and looking forward very much to the future. This isn’t the end of the world. I was 27 years a barrister and then this job came up. I have plenty of ideas about other stuff. Life can throw up things when you least expect. I have been lucky.

“But I am looking to the future with a degree of sadness. It’s been something that has been so great for so long, but you know it’s time.

“I hope my successor looks after Ross and the ratings continue, which I’m sure they will.

“When I started this job I got a message from a bloke called Steve Vizard who said, ‘Don’t get a big head mate. People will be listening to 3AW no matter what.’ He may well be right, and good luck to Russel.”