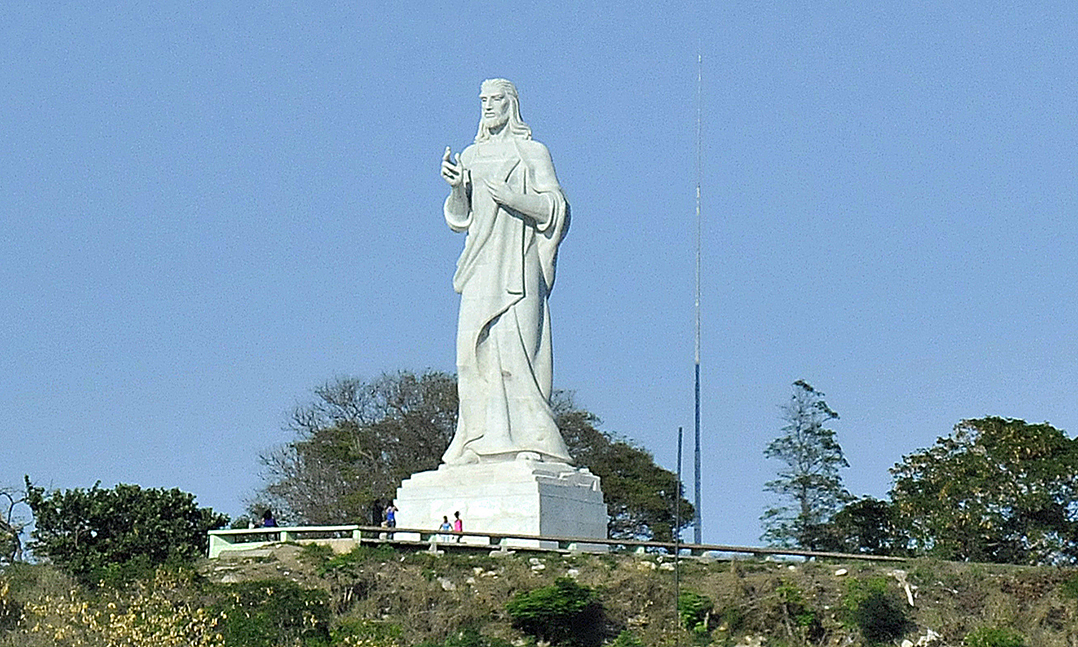 Havana, Cuba, features one of the world’s largest statues of Jesus. Its design reflects Cuba’s people and perhaps its culture.

In 1953, the government of Cuban dictator Fulgencio Batista sponsored a design competition for a statue of Jesus to be erected on a hilltop overlooking Havana. Batista wanted a symbol for Havana comparable to the Christ the Redeemer statue in Rio de Janeiro, Brazil. Cuban sculptor Jilma Madera won the competition and convinced Batista that a statue the size of Christ the Redeemer would be too large for its intended location. Madera then went to Italy, where she executed her design in 67 blocks of Carrara marble. Pope Pius XII blessed the blocks before they were sent to Cuba, where workers assembled them around a metal frame atop La Cabana Hill, across the bay from Old Havana. Batista inaugurated the 320-ton statue on Christmas Eve in 1958, just 15 days before his government fell to Fidel Castro.

Christ of Havana (Cristo de La Habana) stands 60 feet tall and is visible throughout the city. The eye sockets are empty, making it appear that Jesus is looking in all directions. Unlike most monumental statues of Jesus, the hands of Christ of Havana are close to his chest. The first two fingers of the right hand are extended in a V, and the left hand is cupped. Locals claim that Madera intended to suggest that Jesus is smoking a Cuban cigar and cradling a mojito, which she never confirmed. She did confirm that the facial features suggest Cuba’s racial diversity, and the flip-flops on Jesus’ feet were modeled on the ones she wore while carving in Italy.

Christ of Havana became a National Monument in 2017.  It can be reached from Old Havana by ferry or tunnel and provides a wonderful panoramic view of the city.