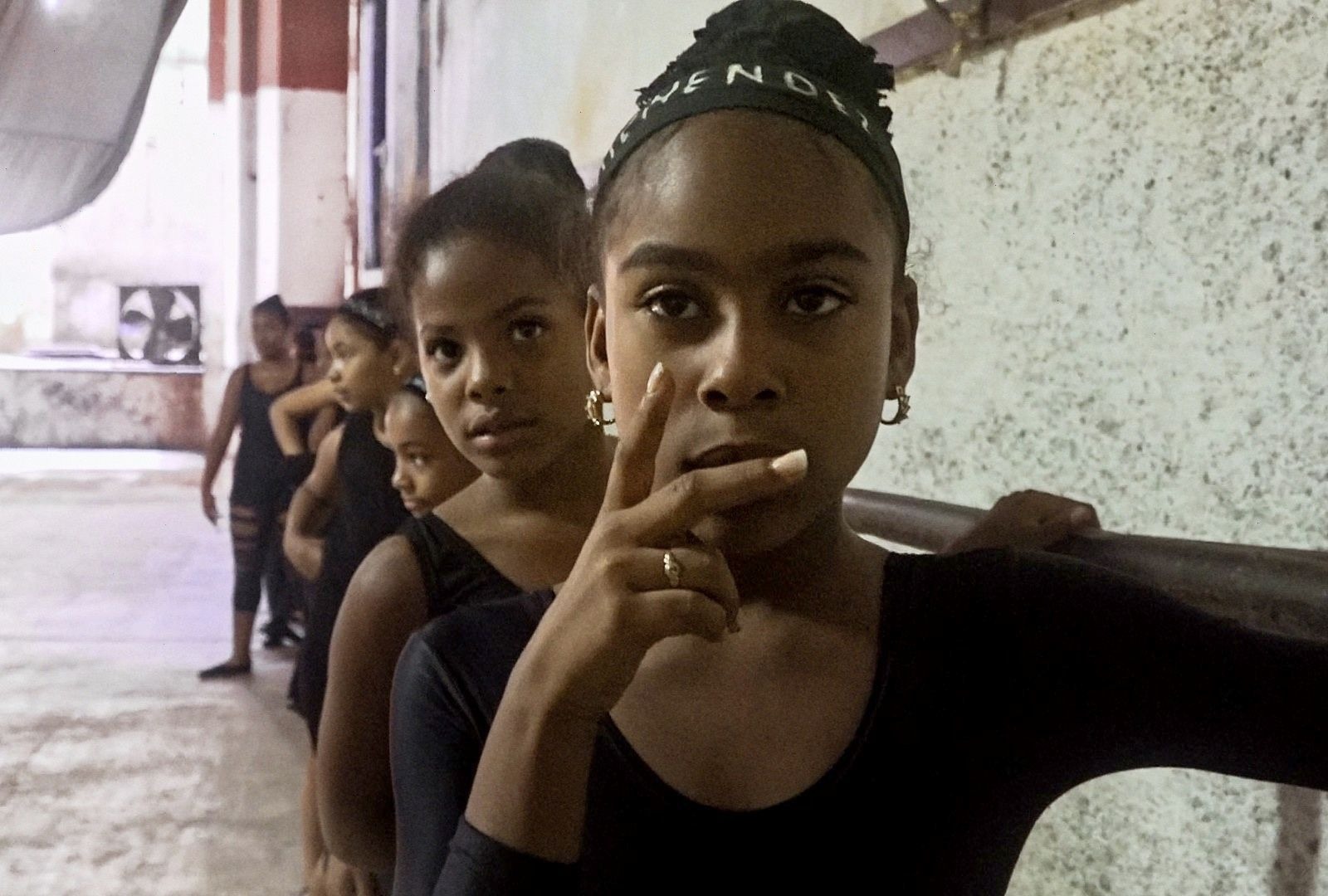 “Epicentro,” director Hubert Sauper’s (“We Come as Friends“) fascinating, observational documentary about Cuba, opens with a man smoking a cigar the country is famous for. Yet the filmmaker, who was Oscar-nominated for “Darwin’s Nightmare,” is more interested in diving deeper into how people on this island country live. Sauper’s film, which won a World Cinema Grand Jury Prize for Documentary at this year’s Sundance Film Festival, and is available through Kino Marquee starting August 28, guides viewers to see the “real” Cuba.

He follows Leonelis Arango Salas, a young girl he deems a “young prophet,” who wants to be an actress. He encounters Cuban musicians singing “Guantanamera” on the streets of Havana. He observes people drinking rum in bars (and gets drunk himself). He greets a woman named Clarita in her home and observes dance classes. “Epicentro” even visits an abandoned sugar factory that used to supply Coca-Cola.

In addition, Sauper’s film offers thoughts about tourism, (including sex tourism), but it also travels back in time, to the sinking of the USS Maine in 1898, to explore American hegemony and imperialism, as well as ideas of utopia, freedom, and slavery. Of course, there is a discussion of Castro.

In “Epicentro” Sauper uses the “hypnotic prism” that is cinema to comment on all these socio-political themes. He films Cuban kids laughing at “The Great Dictator” among other Chaplin films, and has Oona Castilla Chaplin, Charlie’s granddaughter, performing songs and enacting a dramatic scene with Leonelis.

What emerges is a vibrant portrait of a people and a nation that is trying to maintain its own identity without foreign interference. Sauper chatted with Salon about Cuba, the U.S. and his new film, “Epicentro.”

What prompted your fascination with Cuba and the creation of this documentary?

Cuba is fascinating to most people on the planet. For centuries it has been the friction line between the new world and the old world, and the epicenter of the Spanish imperial entity. Havana was the first cosmopolitan, globalized city because people from all continents met there. It was the epicenter of slave trade, the Cold War, and Communist and Capitalist thinking structures.

Had you been to Cuba before? Did you know what to expect to encounter?

I was there 20-25 years ago. Cuba is a part of America and Europe, and culturally, there are things I knew from Africa that I found again in Cuba. I felt at home quickly there. Havana is, in a way, America at its best — it’s the fantasy of Americans. That’s why it’s so interesting — the cars, and this look into the past. For Europeans, too. Something I didn’t treat in the film was that Cuba, to me, is a window into the future because it’s a possible scenario of what happens when global structures and industries break down, like sugar. Life continues in a very different form in a post-industrial society.

How did you determine that you would follow subjects such as Leonelis or Clarita? Why did they make the best participants?

It’s hard to say. Why did I choose Mozart to open the film? The decisions are not conceptual. The ideas are, but the actual choice of characters is by encounter. How do I interact with people and what do I see in them in terms of archetypes and figures for a movie? Clarita is one of the millions of women in Cuba who are struggling. She has a kid and don’t know how to make a living. Some of these [women] are pushed into real poverty and prostitution. Clarita is one of the versions that the kids could become. The tension, I hope you have as a viewer, is that you live with the kids and try to figure out what is going to happen to them. Will they live in the street and give a massage to a German tourist, or study or live abroad? That tension is interesting to me.

“Epicentro” examines the power of cinema to make impressions on people — the manipulation of cinema. Can you talk about the way your documentary both creates reality but also influences it?

Yes, “Epicentro” is a movie. I, Hubert, am a part of the reality I’m describing. I’m obviously manipulating reality and try to enact something. But I’m also overwhelmed by what’s happening around me. I’m constantly playing with the question: What is reality, or fake, or true? I reflect on it in a playful and real-time way.

If I’m applying the same methods to the things I’m criticizing, I am playing with an open hand of cards. In the film, there is a scene of the kids in school watching a man talk over a silent movie being shown. That was a real school and real children reacting to what they saw. But they are bluffed by the real look of fake images. Any visually literate person understands that, and I’m playing with it. I’m not pretending to say that I walked into school and someone was talking about cinema from the 1890s. It’s staged, but it doesn’t take away from the reality of what is happening or being shown. What I’m documenting is what I see — the Cuba I see. But I am there with my own questions and my own confusion and the paradox of me being in that situation and understanding that history.

You feature Oona Chaplin and show several Chaplin films to the Cuban children. Why did you include her in your documentary?

It was a strange situation. I shot the scene where the kids are trying to get my phone and make a film on the rooftop of a house. They knew how to work fast forward and slow motion — which I didn’t know myself, by the way — on my phone. They made these films in front of me. And suddenly Chaplin appeared. It was ghost-like in a way. I called Oona, she’s a friend, and told her to come, and she fell in love with the kids. We created a scene — Leonelis wants to be an actress, so “Here’s an actress. Do a scene.” Oona has a Cuban background; part of her life was spent in Cuba.

Cuba is defined by symbols such as cigars, sugar, rum, but you focus more on Fidel and what he means to Cubans. Can you discuss that?

Places like Cuba are so overloaded from things that have been overstressed — images and clichés. It’s impossible to make a bad photo in Havana because everything looks amazing! But it is also full of clichés. Fidel died when I started to shoot the film, that’s why it’s in the film. I wasn’t going to treat the Castro aspect. It’s an important part of the Cuban history, but it’s been talked about too much. The man standing on the globe [it’s a floor design] says, “Cuba is a utopia, but I don’t know what utopia means.”

It’s not something I intellectualized. When you open a movie, you strike a contract with the audience. You are now in a cinema and follow a story you may not be used to following. Talking about something abstract gives you a film. You can sink into it, or you can refuse it. Both reactions are [legitimate]. The man with a cigar who opens the film is not a conceptual idea. It’s an idea to create a mood. He had a cigar because many people have cigars. The association you have is the right one. I don’t want to lead you to something specific. I want you to feel the rhythm and the story starting.

There’s a terrific scene of Leonelis and her friends admiring an expensive pen that costs more than $2,300 U.S. dollars. They talk about their families earning 4 pesos a day and work out how long it would take to buy that pen. What observations do you have about the inequality in a country that is modeled on a utopian premise where everyone is supposed to have what they need?

I think that’s what I wanted to produce. Utopia as a concept is unique, but we have to be aware of it. Utopian often turns into dystopian. What is strange is that when I studied Thomas More’s book “Utopia,” and I looked at the charter from the Cuban revolution, it basically quotes More’s book. The headlines of the revolution were pulled from “Utopia,” which was written 500 years earlier!

I loved the thoughts in the film about tourism, and how it is “superficial.” There are scenes of a couple participating in sex tourism, and even a photographer trading a pen for a photograph of a young boy, perhaps exploiting his subject. Can you discuss these themes?

Tourism is a form of invasion, and all of us are tourists. We are the wave. I thought that the imagery of a soldier armed with guns plowing into a town is similar to tourists armed with cameras — a similar kind of invasion. The sheer image of the guy from New York giving away pen. He’s armed literally like a guy in Baghdad. Mass tourism was invented by a God-fearing half-crazy Thomas Cook, which is the name of a travel agency now in the UK. He Invented mass tourism and got rich people from Britain to discover the Nile in big boats.

There is considerable anti-Trump sentiment from the Cuban people. What do you want viewers to understand about American hegemony after seeing “Epicentro”?

I’m not American, but I grew up with Americans, and I know it is not much different than Europe; Europeans went to America to kill Apaches. It’s complex. There’s a dialectic in my films of haves and have-nots, North and South. In America and Europe, we have microphones and cameras, and we talk, so when you go to Sudan or Cuba, we can learn more about ourselves if we are listening carefully. It’s not about the others, it’s about what we are doing there. The hegemony is a fact, and the intervention is painful — Baghdad, Vietnam — the prototype was the Spanish-American war. That was the Beta version of a whole century of interventionism. It created a narrative of liberating Cuba.