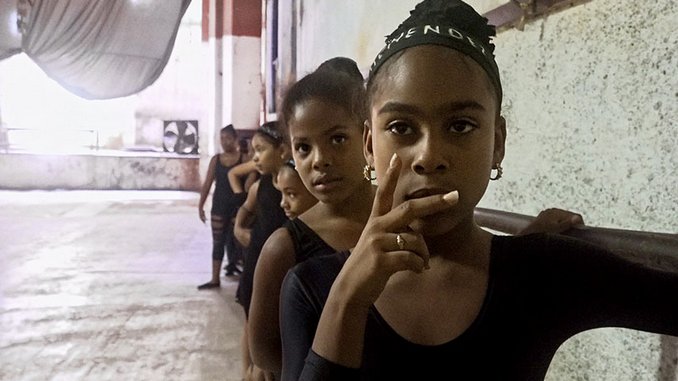 A recurring character in Hubert Sauper’s Epicentro—the Austrian director’s latest documentary to explore the enduring imprint of colonialism across the globe, this time set in Havana—recalls Christopher Columbus’s supposed impression upon first seeing the Cuban beaches: “The most beautiful land that man’s eyes have ever seen.” The woman cheekily remarks just how he right he was, but neither she nor Sauper himself are interested in the quality of Columbus’s assessment. Rather, they are interested in his point of view, in the still-felt ramifications of New World utopianism that came about during the Renaissance and has trickled down in different shapes and sizes through the ages.

Cuba may indeed offer unparalleled paradisiacal sights, but, if images from Sauper’s digital camera are any indication, economic collapse has led to a proliferation of island-hopping Europeans who are breaking the country’s long-held resistance against the sort of imperialistic capitalism that centralizes tourism in caribbean nations’ economies. Sauper approaches this landscape with a meandering look at Cuba’s historical relationship to colonialism, and specifically to the United States, told through discursive visits with Havana denizens and his own musings on the legacy of cinema as a sort of colonial arm itself.

The latter is expressed in myriad ways, including a man with a magician’s top hat showing a theater full of children snippets from Thomas Edison’s 1898 filmed reenactments of the Spanish-American War, footage with a documentary function that positions the United States as liberators. When the stars and stripes are raised on the Cuban beaches, the school children boo, the conflicts of history somewhere between them and the screen. Likewise, footage that appears to depict the explosion of the USS Maine is revealed to be toy boats in a bathtub, and the deathly fumes cigar smoke from the cameramen; “cinema is witchcraft,” he says. Yet Oona Castilla Chaplin, granddaughter of Charlie Chaplin, makes an appearance as a children’s acting coach, strumming a ukulele while students run around her with glee. She screens for them The Great Dictator, and Sauper plays words from the film’s famous final speech (“I don’t want to rule or conquer anyone”) just after another appearance of Edison’s material, briefly pitting an idealistic cinema against a cynical one.

If Epicentro seems like a film with a lot on its mind, Sauper lays out the not-quite aimless but certainly scattershot framework up front. Cuba, with all its utopian connotations (Havana literally means Heaven, he says), has been the epicenter of some of the world’s most dystopian developments: “[The] slave trade, colonization and globalization of power—ingredients of modern empire.” His primary characters are school children—two precocious girls and a boy—navigating their ever-changing environment. Others reveal alternately a zest for life or some sort of economic disillusionment, usually expressed within the parameters of the United States embargo and Trump’s reversal of Obama’s softer stance. A few poetic passages glow with the digital blue and orange hues of a Havana sunset, capturing a sense of authentic wonder as waves crash against an industrial surf, locals pondering in jest if it’s the end of the world. Sauper may not be able to extricate a colonial legacy from his very presence, but the ambiguity in his images of Cubans enjoying the ocean’s spray alongside graffitied concrete works to combat the infantilizing gaze of island tourism.

The children are readily aware of, and well-versed in, the chilly relationship between the US and Cuba. To prove her historical chops, one of the school girls pieces together for the camera the eight conditions of the Platt Amendment that led to the United States’ departure from the island in the early 1900s. The film’s most interesting moments come from Sauper’s engagement with these girls and their growing fascination with the capitalist aspects of life emerging around them despite their upbringing in a crumbling communist state. In a luxury resort, Sauper puts on his best tourist dad voice to get past the hotel doorman after assuring the kids that, as a white man, if he speaks English and makes up a room number he can get them to the rooftop pool. Sure enough, the gambit pays off and they get a brief taste of the high life, splashing around and eating cake so expensive they scoff when they hear the price. Such moments, as when they discover slow motion video on Sauper’s iPhone, reverberate beyond political and economic systems—they are interactions ripe with contradiction and compassion.

One contradiction Sauper feels compelled to address is that of his own position as a traveling European filmmaker against his skeptical eye towards tourists—is he not one himself? A subject who speaks on the dangers of tourism to national culture and the way it enforces subservience to foreigners asks Sauper how much “making cinema resembles tourism.” Though Sauper doesn’t provide an answer, it’s a thought clearly on his mind, and one the film cannot entirely escape. He films his interpersonal interactions with an abundance of humanity and respect—in contrast with a photojournalist who makes a brief appearance—but an ill-timed rock needle drop over an abandoned sugar mill and a local describing its decline doesn’t function the same way as, say, The Feelies do in Olivier Assayas’s Cuban-set Wasp Network. Its presence here seems at odds with the balance of power among his subjects, his observation, and his own musings and structure. The mood he strikes is discordant with the material—not a problem in and of itself, but indicative of how self-reflexivity can slip into noncommittal indulgence (as opposed to the very committed indulgence of musical discord over nonfiction footage found in something like Werner Herzog’s Fata Morgana).

The idea of the island utopia in Western parlance is, of course, inextricable from its colonialist roots. The word itself comes from the fictional island of Thomas More’s 1516 book, Utopia, the tenets of which Saupert outlines in an early monologue. Exploration to lands then uncharted by Europeans posed existential and philosophical quandaries, and positions varied on whether natives were barbarians or some version of pre-fall Edenic humans, redolent of those described in Plato’s Golden Age, a mythical long-ago society of virtue and harmony. It imbues islands such as Cuba with an air of romance while also subjugating reality to the perspective of those who would bend the country to fit their own conceptions, and needs, of paradise. Epicentro depicts Cuba as a land that has long battled imposed polarities akin to that false Renaissance dichotomy: barbarous and noble—utopian and dystopian, scenic and impoverished. Intimate images in an age of transition: Sauper finds a view of modern Cuba between the contradictions history has forced onto it.

Daniel Christian is a writer and filmmaker based in Atlanta, Georgia. In addition to Paste, he has written for Filmmaker Magazine and No Film School. You can follow him on Twitter.