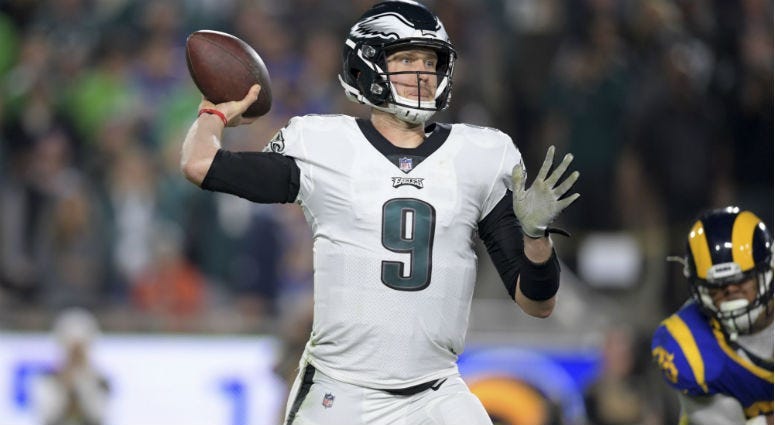 The main reason the Giants could not pursue Nick Foles was the spectre of the Eagles shackling Foles with the franchise tag, making him too expensive to acquire, plus you still have to trade for him.

In a rare but welcome flash of leniency and largesse, the Eagles did the right thing by their former QB – the only QB to win them a Super Bowl since they’ve been playing the game – letting him walk, with their compliments. Now Nick Foles is unencumbered, either by franchise tag, contract or team obligations.  He is a free agent.

Yet the only word we hear from Big Blue’s brain trust is a delusional dream of playoff glory for their Mesozoic QB, Eli Manning. The Jacksonville Jaguars are courting Foles so hard that nary another team is even being mentioned as a destination for the Super Bowl LII MVP.

Reports: Giants Inform Landon Collins They Won’t Use Franchise Tag On Him

Why aren’t the Giants at least calling Foles’s people? Why don’t they send a limo his way, whisk him to a swanky steakhouse, slide him a Scotch, jam a Cuban cigar in his mouth and make those manly overtures in any bromance?

With Foles in the free agent fold, the G-Men have no excuses to check under every rock for their next franchise quarterback. Maybe they like Kyler Murray or Dwayne Haskins. If they don’t, then their muted take on Foles is inexplicable and inexcusable.

In fact, the Giants should find Foles refreshingly familiar. Imagine an NFL quarterback who doesn’t post Playstation numbers during the regular season, but turns into the Human Torch in the playoffs. He also doesn’t fear the favored Pats and beats Brady and Belichick in the Super Bowl. Sound like anyone we know?

Aside from his freak-show 2013 season (27 TD / 2 INT), Foles has never been one to short-circuit the scoreboard. He’s just got that ever-elusive clutch gene that eludes even the best passers in football. Sound familiar? Foles has a career passer rating of 88.4. Manning? He has a 84.1 passer rating.

Before you pound your keyboard with furious retorts, no one is comparing Foles’s career to that of Eli Manning, who will likely join that merry band of ballers in Canton about six years from now. But Foles does have that metaphysical thing that allows him to play cool when the pass rush is white-hot. But even if the Giants demure on Foles, they don’t run out of options. History tells us that some college QB will enter the NFL this year and turn into a stud.

And if the Giants think they need the top draft pick to pluck a winning passer, consider that Joe Montana, Russell Wilson, Brett Favre, Drew Brees and Tom Brady – all of whom will someday share a wing in the Hall of Fame – were not even grabbed in the first round. Kurt Warner couldn’t even get a backup role and had to play in the pinball games of the Arena League before morphing into a Hall of Famer.

It’s hard to say which is worse – Big Blue’s lack of urgency to find Eli’s replacement or their steadfast belief in him. It’s hard to let go. Just ask the Yankees who watched icon after icon wince while whiffing on a fastball they would have crushed three years earlier, or that pitcher who’s curveball has turned from Lord Charles to ground chuck.

You don’t even have to be a Giants fan to want Eli to breathe life into MetLife for one more season. We all want one last enchanted run deep into January, when Lambeau Field froze the football and turned Tom Coughlin’s face into a glazed apple.

Amazing how Branch Rickey’s wisdom spidered into other sports. Chief among them was his maxim that it’s better to give up on a player a year early than a year late. We were all hoodwinked into thinking that Eli, with one more set of receivers, one more conga line of bull-rushers on defense, plus his splintered skills, could make one last leap at the Lombardi Trophy.

That’s not going to happen. So in the absence of fantasy, it’s time for the Giants to face reality and find the next face of their franchise.