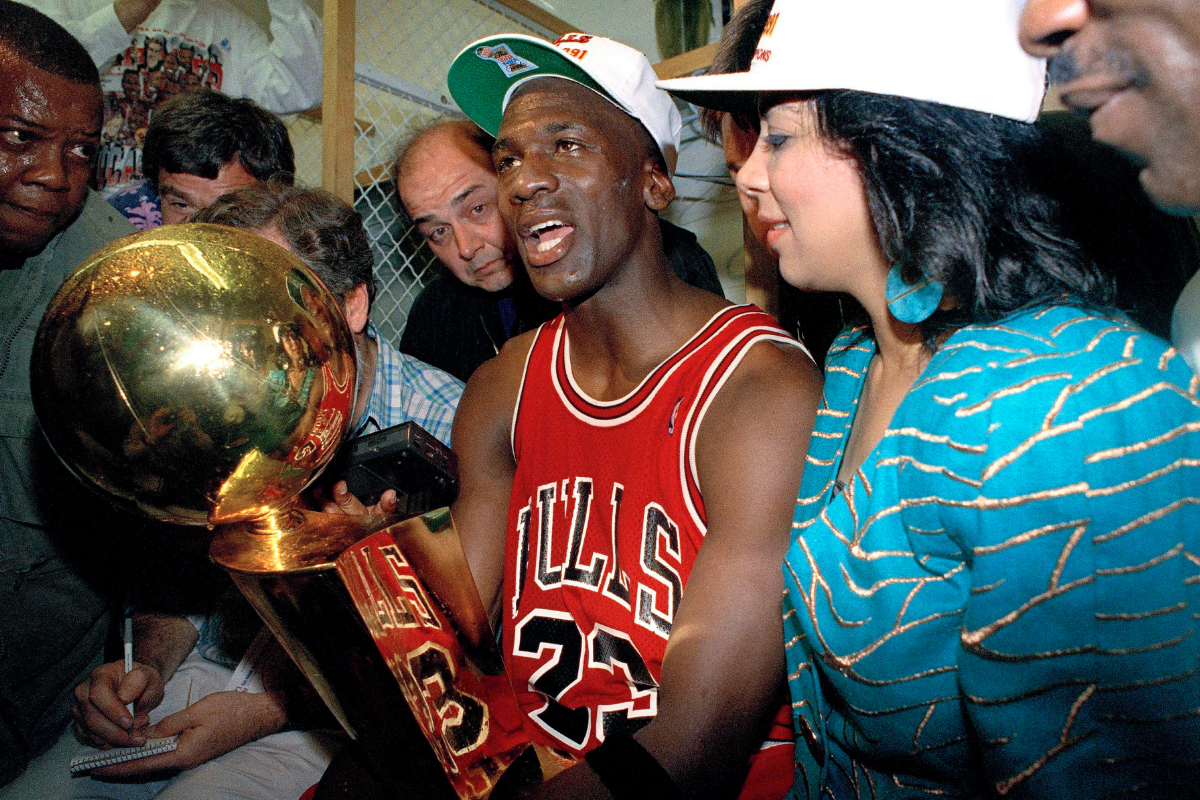 Michael Jordan broke down upon winning his first NBA championship. A guy who didn’t show visible weakness, who was competitive to a fault, burst into tears when the clock struck zero in Game 5 of the 1991 Finals against the Los Angeles Lakers.

Everything he worked for had become reality, embodied by the Larry O’Brien Trophy. Covered by sweat and tears, MJ clung to that piece of hardware. No one could take it from him.

The trophy has that affect on NBA players.

As the pinnacle of professional basketball achievement, let’s take a look at its history:

Back in the early days of the National Basketball Association, starting in 1947, league officials scoured thesauruses for the name of their championship trophy. They landed on a riveting title: the NBA finals trophy.

In 1964, the trophy was renamed the Walter A. Brown Trophy after the original owner of the Boston Celtics who helped merge the Basketball Association of America (BAA) and the National Basketball League (NBL) to form the NBA.

The original design resembles a gregarious chalice straight from the middle ages. It’s something the boys would pour a bottle of ale in and pass around to celebrate a victorious battle. It’s on display at the Naismith Memorial Basketball Hall of Fame in Springfield, Massachusetts.

The current iteration of the trophy was first awarded following the Portland Trail Blazers’ 4-2 series win over the Philadelphia 76ers‘ in the 1977 NBA Finals. The new trophy kept the Walter A. Brown name until 1984, when it was renamed in honor of former NBA commissioner Larry O’Brien.

O’Brien previously served as Postmaster General under President Lyndon B. Johnson before leading the NBA.

The Celtics were the first NBA champions to claim the newly dawned hardware.

How is the Larry O’Brien Trophy Made?

The trophy is manufactured by jewelry company Tiffany & Co. Unlike the NHL’s Stanley Cup, NBA teams maintain permanent possession of the trophy. Each trophy has the winning team name and year engraved.

Who Has the Most Larry O’Brien Trophies?

The Los Angeles Lakers lead the way with 10 Finals wins since the trophy’s inception, including five with the late Kobe Bryant. The Chicago Bulls are second with 6, followed by the San Antonio Spurs with 5, the Boston Celtics with 4, the Detroit Pistons, Golden State Warriors, and Miami Heat with 3 each, and the Houston Rockets with 2.

The Dallas Mavericks, Cleveland Cavaliers, and Toronto Raptors won three of the most memorable postseasons of the past decade in 2011, 2016, and 2019, respectively. Mavericks owner Mark Cuban shared a victory cigar with the trophy after their last NBA Finals game win.

In 2020, the Lakers or Heat will add to their collection. Jimmy Butler, big man Bam Adebayo, Goran Dragic, and Anthony Davis are chasing their first title while four-time MVP LeBron James is going for his fourth.

The strangest season and playoffs in NBA history will make the trophy all the more special.