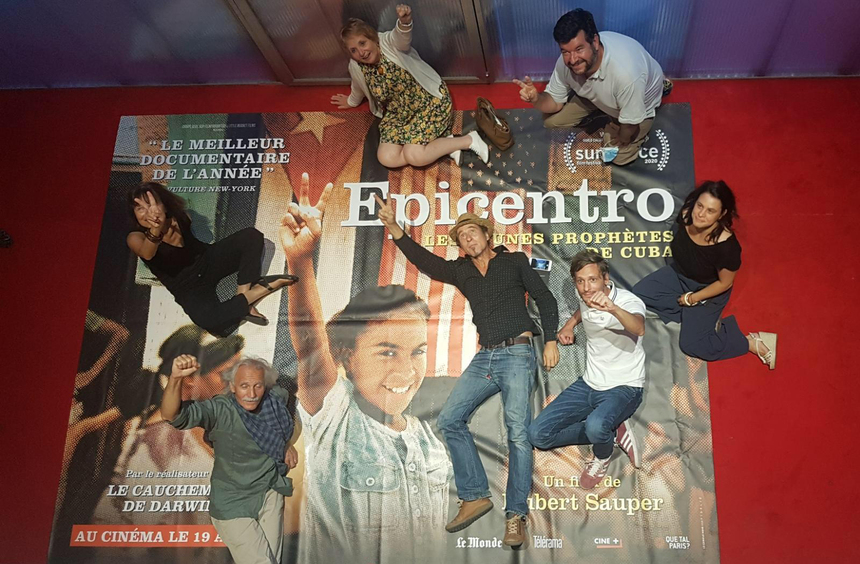 Hubert Sauper, known for his searing documentaries on the effect of globalization and legacy of colonialism on African continent, in Darwin’s Nightmare and We Come as Friends, now turns his attention to the island nation of Cuba. But this time, instead of his journalistic, overtly expansive approach which was necessary to shed a light on the issues that no Western countries knew or cared about, Sauper takes more personal approach in Epicentro, perhaps because Cuba, the Caribbean island nation’s reputation as America’s longest running foe in such a close proximity, has been a known entity to most Westerners.

This doesn’t mean Epicentro lacks a bite on exposing and criticizing inhumane US policy on Cuba over the last 50 years and the new exploitation in the form of tourism. Blending cinema historionics and geopolitics Sauper creates something that feels pointy yet ethereal and deeply personal.

The most striking parts of these children are how vividly conscious they are about Cuba’s place in the world as the sole remaining Communist regime (North Korea is something else entirely at this point) and proud to be standing up to the world’s superpower up north for so long. Yes, there are elements of brainwashing, as they are constantly reminded in school and on the streets and on TV of Fidel Castro and Che Guevara’s revolutionary rhetoric. But is that talk of self-reliance, cemented by decades of crippling economic sanctions, a bad thing?

Whether it was Spaniards or Teddy Roosebelt, it was colonialism through and through. American invasion of Cuba in 1898 is based on the fake footage of USS Maine blowing up in which US government created in the bathtub with blowing cigar smoke and toy ships. Every Cuban knows this, a fact Sauper hits again and again throughout the film. Their literacy rate is staggering 96 percent.

First world arrogance is in full display, as an American photographer snaps shots of the locals without any consent. They are used to this. Kids pose for him. He goes into their courtyards, snapping copious amount of pictures, through the windows even. Kids ask him for something in return. He gives the kid a pen, turns to the camera and say, “they should be honored to be photographed by me.” An old German tango dancer, who is in Havana for 2 weeks, wants to show off his tango in school in front of kids doing ballet lessons. A teacher lets him, while kids snicker in the background.

Talking with the cadre of ex-pats and locals, Sauper juxtaposes the folly and absurdism of tourism industry. It is revealed that the director is a son of innkeepers in small Austrian resort town. In conversation, his friend says there are two types of people: normal human beings and tourists. There are luxury hotels where only American and European tourists stay. One of the main subjects, Leonelli, a beautiful and bright little girl, wants Sauper to sneak her and her friends into the hotel so they can use the pool on the roof. They have a plan. Sauper will pretend they are his kids.

The director’s whiteness and his camera adds another dimension to the film. Sure, he has been invested in other parts of the world and their people. He speaks their language. But ultimately, he is a foreigner. How do you reconcile that he is there making a film? How much of a blending in really make you ‘normal people’ instead of a ‘tourist’?

Sauper ties the idea of modern day Cuba, full of intact 50s archetypes (cars, buildings) as fiction that provides false narrative for tourists and of cinema: how they resemble, by way of presenting fiction, tourism. Cinema is all make-believe, anyway.

Unlike his other documentaries, Epicentro is filled with sense of joy and buoyancy. The flow of tying ideas together — past/present, reality/fiction, normal person/tourist — seems natural and even spontaneous. These ideas are imbued in the presence of Oona Chaplin, a Hollywood actress and a granddaughter of Charlie Chaplin and daughter of Geraldine. She enacts scenes with Leonelli, sings impromptu Spanish songs with her guitar, and attends the screening of a Chaplin film to the delight of kids.

Epicentro is an intimate, fluid, ethereal film while still being sharp edged in condemnation of the globalization and colonial history. It’s one of the truly great documentaries of 2020.

Dustin Chang is a freelance writer. His musings and opinions on everything cinema and beyond can be found at www.dustinchang.com