The Ybor City neighborhood of Tampa has had its ups and downs since it was founded by cigar maker Vicente Ybor in 1885, but if a new hotel is any indication, it may be on the upswing again.

The Hotel Haya made its debut in September and provides the area’s first independent, full-service lodging option. Named for Ignacio Haya, one of Ybor’s competitors in the tobacco trade, the 178-room, six-story hotel is the latest offering from Aparium Hotel Group, which specializes in repurposing older buildings into community-rooted hospitality centers.

In this case, Aparium converted two faded commercial buildings and an empty lot into a chic, contemporary space built around a courtyard with a pool. There is a bustling destination bar, a restaurant with a terrific private dining room and a cafe, all accessible from Seventh Avenue, the spine of Ybor City’s street grid.

I stayed for a night in December as a guest in one of the Haya King Balcony rooms overlooking the avenue, which is quiet during the day but just the opposite on a Friday and Saturday night. Seventh Avenue has a noisy car-cruising scene, which Tampa police are trying to discourage with a large electronic sign warning of fines for excess decibels.

But during the day, my wife and I enjoyed using the broad balcony, which, with its southern exposure, gave us a lot of light in a cool winter month. 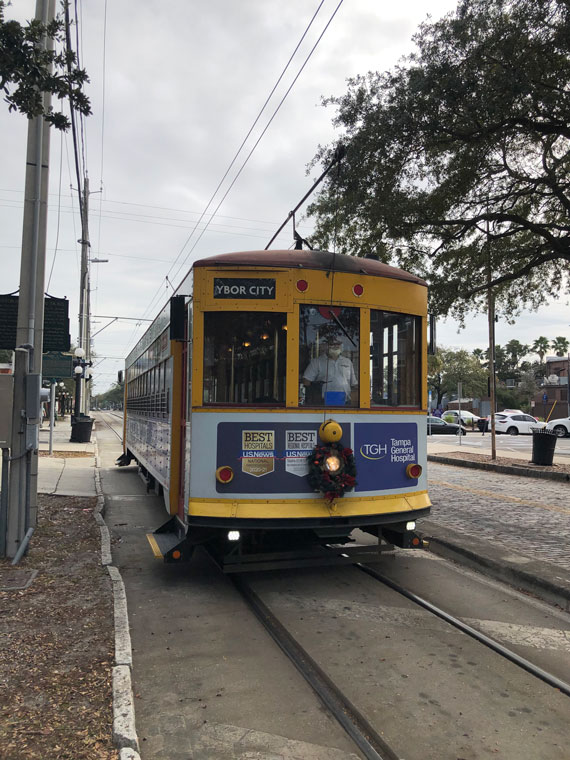 In our room, the king bed faced floor-to-ceiling windows, giving us the option of a city view from under the covers. Behind the bed was a desk, fridge and luggage space, while at the foot of the bed sat a long divan. The flat-screen TV was mounted on a side wall.

Rates on a weekend in late January for that room are listed at $239 on the Hotel Haya website.

One highlight of our stay was dinner and drinks at Flor Fina, the hotel’s open-plan fine dining restaurant. We started with two very well-made daiquiris, which we enjoyed poolside before moving inside for an appetizer of octopus served on grilled flatbread heaped with an avocado salsa topping. We passed up some tempting items on the menu, such as a fiery Grouper a lo Macho, for a vegetarian plate for two featuring eggplant, a charred carrot mash, a cauliflower dish and a black bean hummus.

A roast-suckling pig feast serving four to six and requiring 48 hours advance notice ($90 each) is the menu headliner.

The next morning, Cafe QuiQuiRiqui was open at 7 a.m. serving Cuban coffees and pastries. There, we met Max Herman, the junior partner in a father-son business called Ybor City Historic Walking Tours. We followed Max on a two-hour tour of the historic district, one of only three such districts designated nationally in Florida. 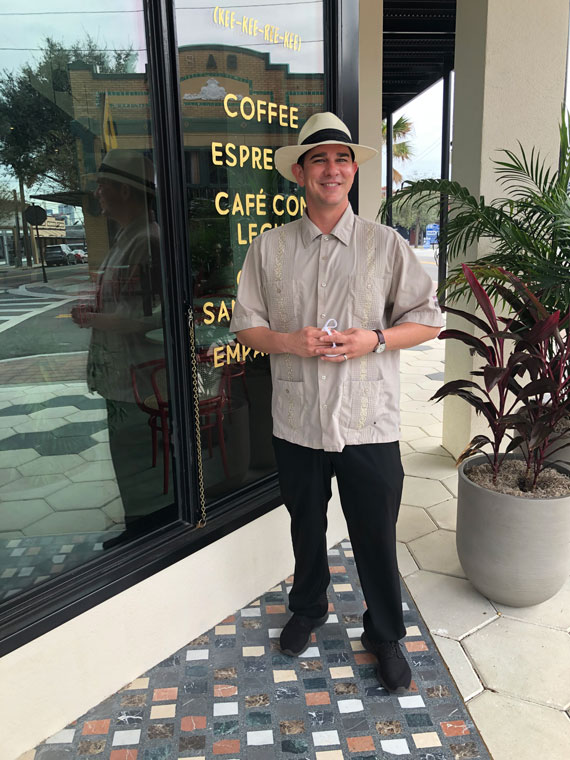 We started the tour on Seventh Avenue, which Herman likened to the Broadway of Ybor City in its heyday in the 1920s. More than 200 cigar factories, small and large, employed thousands of workers. Immigrants flocked to the city for jobs.

It’s no coincidence that the street bears a passing resemblance to the historical districts of New Orleans, with its wrought-iron balconies. According to Herman, the retail buildings that line the avenue were built by Romanian Jewish immigrants who relocated to Tampa from the Crescent City.

A preference for the cheaper cigarettes over cigars during the Great Depression hit Ybor City hard, starting the decline of its signature industry. Today, Herman says, “Seventh Avenue is more like Bourbon Street than Broadway.” With its first story shops filled with beer halls, hookah bars and cigar emporiums, “It’s more of a bar-hopping, party atmosphere these days,” he said.

But there’s a lot to Ybor City beyond Seventh Avenue, including its numerous historical social clubs, one devoted to each ethnic group. We were able to tour the interior of El Circulo Cubano, with its stained-glass window and spectacular third floor ballroom.

Strolling the Ybor City streets, you can’t help noticing the brick paving, crafted of bricks used for ballast by cargo ships visiting the nearby Port of Tampa in the 1800s. Also hard to miss are the 800 or so roosters that roam the streets with their colorful plumage and noisy crowing. They’re protected by city ordinance.

A few remaining 1890s shotgun cottages built for cigar workers are a reminder of what the thriving neighborhood must have looked like before most of it was bulldozed during urban renewal in the 1960s.

Perhaps the most impressive landmark in Ybor City is the brick factory complex built by Vicente Ybor in 1886. It covers a city block and since 2010 has been owned by the Church of Scientology.

Anchoring the east end of Seventh Avenue is another Ybor City institution, the Columbia Restaurant, which has been serving Cuban fare to locals and tourists alike for decades. It buys its bread from La Segunda, a bakery on the edge of the historic district that is worth a visit for sandwiches and pastries.

Beyond Hotel Haya, two other hotels — a Hampton Inn & Suites and a Hilton Garden Inn — offer lodging within the district.

Running a block north of Seventh Avenue through Ybor City is a free and historical trolley service, a light-rail excursion that connects to the cruise ship terminal, the 250,000 square foot Florida Aquarium and downtown Tampa.

Farther afield in Tampa, there are other sites worth a drive. Some of them, like Busch Gardens Tampa Bay, are linked to the area’s history as a brewing center. Carrying on the brewing tradition, craft beer maker Cigar City Brewing host guests at its Spruce Street Taproom, where it has a variety of lagers, porters, ales, sours and IPAs for sampling and to carry away.