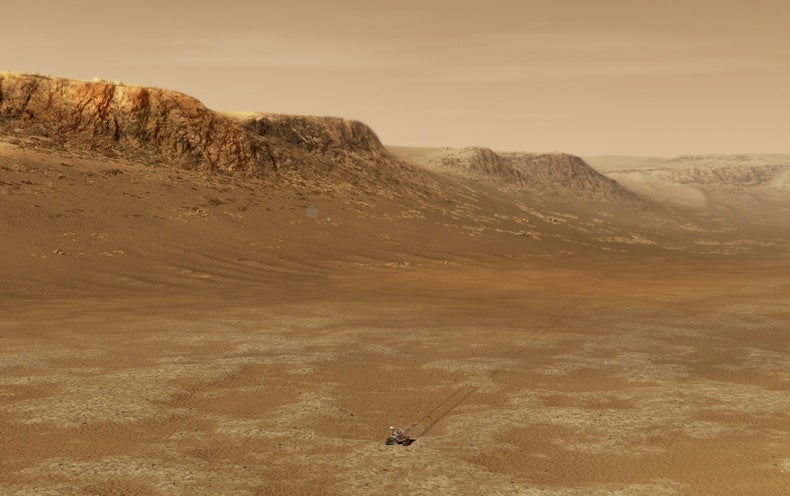 On a space mission, timing is everything. An intricate choreography of commands and actions is required to make any such mission a success, and none more so than an escapade on the surface of another world. Now, on February 18, NASA is set for another delicate dance of interplanetary chronology when its Perseverance rover touches down on Mars—the successor to its aesthetically identical sibling, Curiosity, which landed in 2012. This time around, the mission is conducting a search for past life on Mars, alongside other exciting experiments.

The 1,025-kilogram rover is powered by a radioisotope thermoelectric generator, fueled by heat from decaying plutonium, which should help it avoid a dust-laden fate such as prematurely ended the missions of its solar-powered predecessors Opportunity and Spirit; but getting up and running as soon as possible after the landing is still crucial. The rover has an ambitious amount of science to conduct in its primary mission lasting one Martian year (two Earth years). And, although its mission is likely to be extended, given the overwhelming richness of its landing site in the ancient Martian river delta within Jezero Crater, scientists are eager to get the ball rolling sooner rather than later.

Before they can get down to that urgent business, however, Perseverance needs to first endure its autonomous seven-minute descent to the surface—known as the “seven minutes of terror”—and then check its vital organs are in working order as well as launch a first-of-its kind attempt at aerial flight. Suffice to say, the busy rover’s schedule is positively jam-packed. Interplanetary mission timings are always subject to change depending on how things progress, of course, but a timeline is already in place for Perseverance’s first 100 days on Mars. (Note, a day on Mars is about 40 minutes longer than a day on Earth.)

Here is how it is all set to play out.

The very first thing Perseverance will do after landing is to fire some pyrotechnic devices, releasing the covers on cameras on board the rover. It will then take images in front and behind the rover and send those back to Earth via NASA’s orbiting Mars Odyssey spacecraft and Europe’s Trace Gas Orbiter. After that? A quick nap of course, “to recharge the batteries until the next day on Mars,” says Jennifer Trosper, deputy project manager for the mission at NASA’s Jet Propulsion Laboratory (JPL) in California.

Over the next few days, Perseverance will go through a number of important tasks to ensure it is up and running smoothly. It will confirm its exact location on Mars, while the team will “try to establish the vehicle’s base functions—power, thermal, and communications,” says Trosper. “Because if any of those base functions aren’t working, then the vehicle can be in harm very quickly.” It will also use the sun’s overhead position to figure out where exactly Earth is in the sky for direct communications, and then run through checks of its instruments and systems—while continuing to beam back images of its surroundings, too.

“It’ll take us about four or five days to get all that done,” Trosper says. The next five days, meanwhile, will be spent transitioning from the software the rover used to land to the software it needs to operate on the surface. The rover will then test out its robotic arm, which will be used to collect and store samples on the surface, and will also take its very first ‘steps,’ performing a short drive on its six rugged wheels. While all this is going on, however, another team will be poring through images of the landing site, getting ready for a major test—the first flight on Mars.

Tucked into the belly of Perseverance is a small 0.5-meter-tall stowaway called Ingenuity. This “Mars helicopter,” with four spinning blades, will attempt powered aerodynamic flight through the skies of another world for the first time, a technological demonstration that could be a prelude to flying reconnaissance drones on future human missions. Ingenuity’s flights will require Perseverance to find a flat location, somewhere picked by the helicopter team within a 10-day-drive of the landing site, says Trosper, or up to one kilometer away—with the rover able to travel about 100 meters a day.

Once it finds that site, the deployment will be slow. Ingenuity is stored sideways under Perseverance, so it must be slowly rotated and lowered to the surface. The legs must be unfolded with the help of springs, while the helicopter must receive a final jolt of charge from Perseverance before it switches to its own onboard solar-powered battery. Then, once all checks have been complete and everything is ready, it will be gently dropped to the surface. In theory, this whole process—apart from the battery charge—takes just minutes. But the engineers will progress extremely carefully, taking multiple pictures along the way, meaning the entire deployment will actually be “in the range of a Mars week,” says Joshua Ravich, the helicopter’s mechanical engineering lead at JPL.

From here, the helicopter’s mission begins. It has a 30-day window to conduct up to five autonomous flights on Mars, each lasting up to 90 seconds. The flights will begin low and short but should eventually progress to higher altitudes and distances of potentially a few hundred meters. “Flight number five could be something as complex as liftoff, fly some distance, pick a new landing site by itself and land at this site,” says Ravich. Only one flight can be attempted per day at most, with the helicopter charging in between. Watching on will be Perseverance, taking images and possibly even video of the flights.

There is some margin for error in these early activities, with day 60 being the earliest and day 100 the latest they might finish. Either way, the conclusion of the helicopter test flights—five flights or 30 days, whichever comes first—will mean the initial phase of the mission is over. Now, the move towards the rover’s primary science objectives will begin. “The engineers turn the keys of the rover over to the science team,” says Katie Stack Morgan, the deputy project scientist on Perseverance. “Once the helicopter is done, many of our science instruments will be ready to go.”

The science team will have picked a first site to send the rover to in the mission’s initial weeks on Mars. “Depending on where we land, we have a menu [of sites] to choose from,” says Morgan. “What I anticipate we might be looking at is planning a science investigation on the crater floor before our investigation of the [river] delta, because it might be a volcanic rock, and volcanic rocks are really good for getting absolute age dates from,” giving a useful temporal baseline for any future samples collected by the rover.

In the days thereafter, Perseverance will potentially scoop its first samples on Mars and leave its first cigar-sized tube on the surface—small caches designed to be picked up by a future sample return mission, to be brought back to Earth. Its MOXIE instrument, a technology demonstrator that will pluck carbon dioxide from the Martian atmosphere for chemical transformation into breathable oxygen, will likely be up and running, as will MEDA—a Martian weather instrument—and RIMFAX, which will use radar to look for water-ice underground.

It is a mission that will begin unlike any other, given the helicopter demonstration in its early phase. But once that is done, and the rover has gone through its checks to confirm it is properly functioning, its primary mission on Mars will be truly underway. After its first 100 days on Mars, possibly sometime in June, the rover will be ready to conduct one of the most exciting searches for life on Mars to date. At this point it’s “full steam ahead,” says Trosper—and who knows what secrets might lie in store?