Another week of fixture gymnastics faces A-League fans as Match Week 9 rips into action this Friday night, when the Reds host the ladder leading Mariners.

The two freshest faces in the competition meet on Saturday, before the intriguing night-time clash between Brisbane and Sydney FC will perhaps determine just how good the men in orange actually are.

Melbourne Victory host the Jets and the Phoenix over just four days, a grand final replay looms on Tuesday and Wellington invite the Wanderers down to Wollongong for a Sunday afternoon match.

Paul Nicholls stands as a runaway leader at this early stage, with a mountain of postponed fixtures on which to catch up as the season progresses.

Good luck with your tips and be sure to enter them in the sheet below to have a say as part of the voice of the crowd. Here is the way the panel sees all the action playing out this weekend.

Hard to tip against the Mariners in the form they’re in, but Adelaide fans should expect a response from their misfiring Reds side.

Western United have made a frustrating start to the season and have struggled to gain much momentum, but they’ll be tough to beat in Ballarat.

Geez it’s tough to tip against Sydney FC at home. There’s just something about the Sky Blues that makes them difficult to beat in front of their own fans.

Sorry Wellington, but this isn’t your year. The Phoenix are on a hiding to nothing playing out of Wollongong and the Wanderers should take full advantage.

Sydney FC again? Sure, why not!

Victory’s board will deny it, but the clock has arguably already started ticking on Grant Brebner. They desperately need a win, but do they have the quality?

Adelaide are struggling, yet still mid-table. The Mariners continue to produce and an argument to tip against them here does not exist, despite the fact that the Reds could well win this one.

Western United and Macarthur should be celebrating their brief contributions to the A-League when they meet in the Saturday twilight. I’m tipping the visitors on the back of the ever-improving form of Matt Derbyshire, as well as the fact that the Bulls are a definite top six side.

Brisbane Roar has a chance to prove its title claims as genuine against the champions on Saturday night and for what it is worth, I’m seeing them winning by a two-goal margin and Dylan Wenzel-Halls finding the net once again.

Last time out Melbourne Victory looked better, well sort of, but seeing them chalk up a win against a gutsy Newcastle team is unlikely. Craig Deans to remain undefeated as a permanent A-League manager.

Surely it is time for Wellington to come to life? Surely? I’m losing faith but will stick with them against a determined Wanderers side that is struggling to score frequently enough based on the chances it creates. 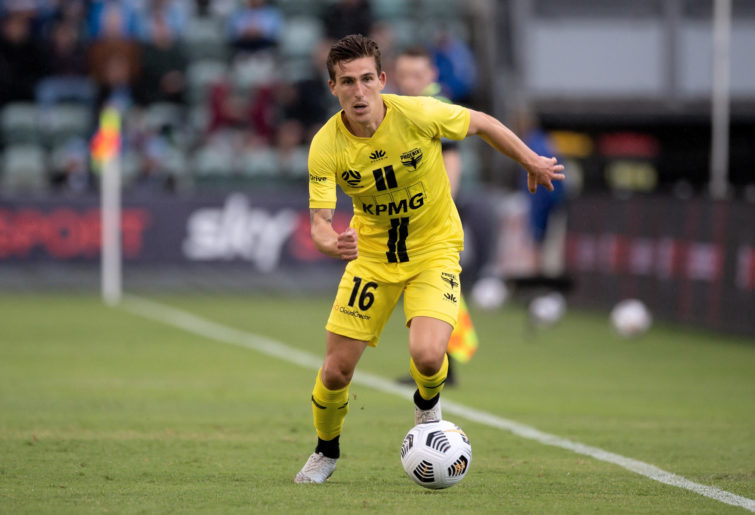 Sydney FC will struggle on the short back up and Melbourne City will get the chocolates on Tuesday night at AAMI Park before the Phoenix towel up the Victory at the same venue a day later.

There was so much love in the A-League on the weekend! Matt Simon became the competition’s gangly cupid when he popped in on a couple’s romantic date in Wollongong.

The Mariners won’t have much love for Adelaide who were ordinary against Macarthur. Central Coast for mine.

Sydney FC and Brisbane should be a match made in heaven. Kosta Barbarouses is back in form and Brisbane are playing with real heart. Sydney to get the win.

Just one win in six is a poor return for Melbourne Victory. They’ve lost their sex appeal and will be no match for Newcastle who are playing good football under permanent coach Craig Deans.

Wellington’s love-in against Central Coast was in peril even before David Ball’s rash red card challenge. Western Sydney have gone six games without defeat and should score well on Sunday.

Melbourne City are again matched up with Sydney FC after last week’s cancellation. I’ll go with my prediction then, Sydney by two. Melbourne Victory will be desperate for a win and should kiss Wellington goodbye on Wednesday.

Seven more mouth-watering games this week, who knows how many of these tasty encounters will actually go ahead. We’re having a 7-course degustation this week, I’ll pair them all with an appropriate drink and see if we have any spillages when last drinks are called.

If the Mariners sparkle at Hindmarsh, I will finally take them seriously as a contender. Adelaide fizzed last week in their no-show at Macarthur and the trust I put in them is now out of the window.

Despite that, Adelaide to win this one by virtue of it being a home game, and it is they who will be clinking their glasses together in celebration. (Paired with a flute of Champagne)

Western United vs Macarthur FC is the battle of the Bilbaino. Eskerriska! If we’re taking form into the equation, the Bulls should romp this.

But I’m still not convinced, and I fancy a Dylan Pierias strike to have the home team toasting the three points at the end. (Paired with a 100ml glass of Txakoli)

Brisbane will be on fire at Kogarah. The simple speed and pace of their football will create chance after chance, getting in behind the home defence, and Sydney will be punch-drunk at the break.

Enter the Brazilian – Bobo to look a yard off the pace but completely at home and get his boot to a cross-shot to win it for Sydney FC in the final minute. (Paired with a Caipirinha served in a frosted glass)

Victory have had a disjointed start to the season and they need to play catch up. Remember they beat Perth, while Newcastle have moved off the bottom with some decent displays.

This game is going to be like a raucous cup tie, end to end football from two teams who desperately need the win. Victory to finally taste victory and demolish the visitors late on. (Paired with a Snakebite and Black)

Come on Phoenix, get your finger out! But this will not be another game where we admire the Wellington team’s play and they come away with nothing. This will be a full three-course meal of a game, a goal a-piece for starters, a fiery encounter either side of halftime and a sumptuous dessert that will leave the viewer wanting more.

Wanderers to go down 3-2 with an injury-time winner from Davila. (Paired with a bottle of Sol with a lime wedge)

New money Melbourne City will host the aristocrats of Sydney FC at the wrong time. The real Sky Blues haven’t purred this season as they have done previously, while City have been ill-disciplined and out of luck.

The class of the visitors will be evident though as City are put to the sword in a five-goal thrashing, with Bobo grabbing another. (Paired with a Calvados and Cuban cigar)

Victory round off the week with a tricky one against Phoenix. You never know what you’re going to get with Wellingong, and like a box of home-brand liqueurs where you’ve lost the paper insert, you’ll have to trust your judgement.

Victory to nick this one with a Fast Ed own goal and a penalty in a second half come-back. (Paired with a Cointreau on ice)