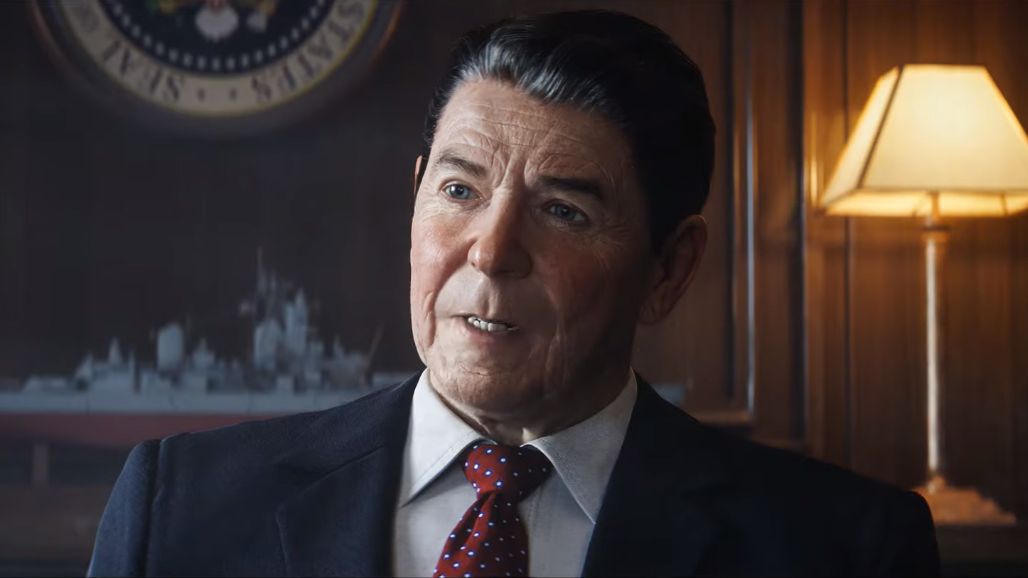 For over a decade, Call of Duty has occupied a space at the very top of pop culture. And with great fame comes… well, famous people. Sniffing around, proffering their pampered faces for motion-capture so that they can be rendered in-game and shot in the head by Captain Price.

These public figures—some living, some dead—are immortalised in Call of Duty games like animated waxworks. The series has hosted a rapper, a general, a racecar driver, numerous actors and at least two dictators. We’ve collected the best examples as an exhibit for you to scroll through, and ranked them by sheer strangeness.

Ronald Reagan began his career starring in b-movies of questionable quality, so his role in a hammy briefing scene from Call of Duty: Cold War is fitting tribute.

The former US president, who died in 2004, marches into a smoky boardroom, cheeks powdered like a carnival crown, to approve an off-the-books mission. He tells the assembled agents there’s “no higher honour” than committing disavowed war crimes in the name of the free world, so that’s all fine.

Snoop’s face doesn’t show up in Call of Duty: Ghosts, but that’s not the asset that made him famous anyway. His silky smooth pronouncements are all over the Snoop Dogg Voice Pack, reminding you to “rack up points by reaching the enemy portal, ya dig?”

According to the king of Long Beach, COD is associated with greatness. “Nine out of ten rappers play this game,” he claims. It’s an accolade that could form the backbone of any marketing campaign.

Treyarch likes to litter its stories with references to the US establishment in order to lend the Black Ops games a sense of authenticity. But in Black Ops II, it made real-life general David Petraeus the Secretary of Defense of 2025, straying dangerously close to endorsement.

That future is unlikely to come to pass, though: four days before the game came out, Petraeus resigned from his role as CIA director over a sex scandal.

If Jeff Goldblum is renowned for anything, it’s kindness—his impeccable politeness in interviews and compulsion to share joy. It’s a shock to see him strap his wife to a spinning wheel, take a knife, and hurl the blade into her skull.

In Black Ops 3’s noir-ish Zombies story, he plays a magician who murders his spouse for the life insurance money. Then he and three other sinners are drugged and left to die in a city overrun by the living dead. “Sorry,” he quips upon popping a prowler. “No way I can make you, uh, reappear.”

Perhaps it was inevitable that Panamanian dictator Noriega would wind up in a Black Ops game. His double life, as both CIA informant and thorn in America’s side, slotted perfectly into the series’ murky historical milieu. Still, it’s odd to watch him blast his own guards with a shotgun and free you, simply to cause chaos, like the antagonist in a Die Hard movie.

Before his death, the real-life Noriega sued Activision over his appearance in the game, which he said portrayed him as a “kidnapper, murderer and enemy of the state”. As he filed the lawsuit, he was serving long sentences in Panama for murder, embezzlement and corruption.

This one’s a favourite for its humility. F1 ace Lewis Hamilton joins the crew of your Infinite Warfare capital spaceship not as a dogfighter or fleet captain, but as the repairman. Every so often you’ll pass him in the corridor and he’ll say something like, “Gaskets are fried, valves need to be resealed.” Then he’ll quietly reseal the valves, while you’re off fighting Kit Harington with a goldfish bowl on your head. Good lad.

“You ready to make history?” BLAMO. In gratuitous slo-mo, the bullet leaves your pistol and splatters Castro’s brains all over his fancy bedroom. Only, it’s not actually Castro, but a body double. Minutes later, America’s most wanted man is standing above you, smoking a cigar.

Cubadebate, the Cuban state-run news outlet, soon mocked the Black Ops mission. “What the United States couldn’t accomplish in more than 50 years, they are now trying to do virtually.

“This new video game is doubly perverse. On the one hand, it glorifies the illegal assassination attempts the United States government planned against the Cuban leader … and on the other, it stimulates sociopathic attitudes in North American children and adolescents.”