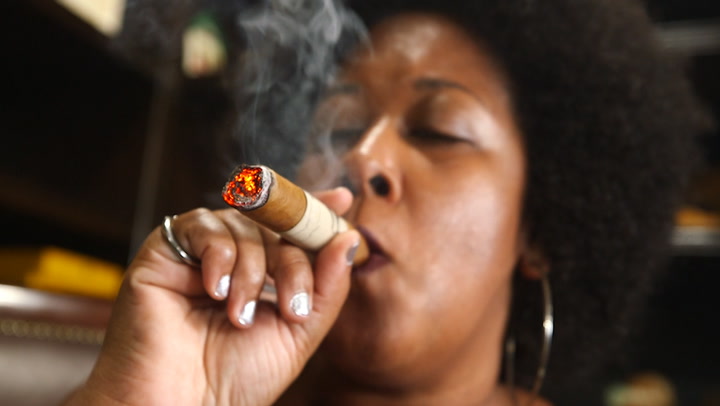 – Yvette and Yvonne are used to standing out. In 2014, the twin sisters started their own brand of cigars called Tres Lindas Cubanas. Since then, they’re often the only Afro-Cuban women in a room full of men.

YVONNE RODRIGUEZ: Imagine walking into a door where you want to sell your cigars, and they don’t even think that you smoke cigars. You know? We don’t start at zero, we start at negative five.

YVETTE RODRIGUEZ: We still get like 20 questions like an interrogation– to find out if we know anything about cigars, if this is really our brand– questions that I don’t hear anybody asking anyone else.

– The doubtful stares didn’t stop them from putting their identity at the forefront of their business.

YVONNE RODRIGUEZ: A lot of people ask us, how do you guys do it? You’re a woman, you’re black, and you’re Latina. And I think that those are positives.

YVETTE RODRIGUEZ: We don’t try to blend in the least.

– The sell their blends on their website, shipping across the country to all 50 states and in local shops. But it all started with an investment of $500.

YVONNE RODRIGUEZ: We were immediately turning a profit, because we invested very little.

YVETTE RODRIGUEZ: It was our testimony to the Black consumer, because I would say more than 80% of our consumers are African-Americans buying Black. That has helped us out tremendously.

– Even their packaging stands out. Instead of the usual glossy, short, and fancy look, their box stands tall in plain wood.

YVONNE RODRIGUEZ: That had a lot to do with the money that we had to invest. But we noticed that it really helps that we’re not too flashy, so we prefer to be a surprise. You know?

– The seeds come from Cuba, but the tobacco grows in Nicaragua where the cigars are also rolled and then later shipped to Miami. The sisters can’t import leaves or seeds directly from Cuba because of the embargo.

YVONNE RODRIGUEZ: Currently we can’t get anything out of Cuba. We definitely are ready for when the door is open for us to create blends with the Cuban leaf. That will be great. Combining them also with the Nicaraguan leaf.

– As first generation Americans, it’s important for them to stay connected to their roots. So they lead trips to Havana, taking people through plantations and factories of Cuban cigars. And tourists are often surprised when they see many of the workers rolling cigars are Afro-Cuban women.

YVETTE RODRIGUEZ: The most famous cigars in the world are being rolled by Black women. It’s really a testimony to the history of tobacco and to cigars. We’re part of history. And then it’s like, I am Cuba. And I am cigars. You know I mean? We could have put models as the face of the brand– super sexy girls, or super hot guy. We’re like, no. We’re going to be the face of it. Every brand has their look, and this is our look.